Thank you to everyone who has continued to follow my food journey here at Katie's Korner.

I've made the decision to make my family blog, The Blankenship's, my one and only blog.

It is where I'll post updates about my family and our everyday life but it will also be where I post new food recipes and craft ideas. I will keep Katie's Korner up and active for you to search my past recipes just in case you've found a few favorites.

I hope to see you soon over at The Blankenship's.

Thanksgiving is probably my favorite holiday next to Christmas. You get to be surrounded by family and close friends, delicious foods, and for our family it's our Christmas season kick off because we do a Christmas ornament exchange. The best part is you don't have to worry about presents and wrapping paper all over the place.

I was asked to share our menu this year so I'm going to take a moment to share the recipes that I'll be making for us this year.

Our event is starting at 2 o'clock this year with the main meal being served at 3:30. Daniel fries the turkeys each year and he smothers and injects them with a butter mixture that keeps them so moist. This year he is experimenting with one and injecting it with buffalo sauce. I usually cook a ham in the crockpot with lots of brown sugar and pineapple.

Appetizers:
Cheeseball - My MIL is making it this year and she doesn't add the hot sauce.
Stuffed Mushrooms  - My family loves these, I've been making them for years but have never tasted one.
Cheese and Meat tray

Dessert:
Pumpkin Pie
Pumpkin Bread
Baklava - I grew up eating this stuff at Thanksgiving compliments of my great aunt Sue. This isn't her recipe but it's the one I use and Daniel could eat the entire pan.
Chocolate Pudding Pie- My sister makes this with a graham cracker pie crust and then instant chocolate pudding.
Assortment of Cookies

I can't wait to get my grub on. The turkeys are thawing in the fridge as we speak and I'll head out Wednesday morning to get the rest of my supplies and my goal is to have everything pre-made the night before so I'm not stressed out when everyone arrives.

We planted one poblano pepper plant this year in the garden and it has been producing like nobody's business. It's one of the peppers that Daniel is unwilling to share with his co-workers so I've been freezing them as we harvest them. We picked yet another fresh batch the other day so after Daniel being out of town for the past several days only to be heading out again in the morning, I thought now was the time to do something with them. I searched high and low for a recipe that tickled my fancy but none came close to what I was looking for. This meant I just needed to create my own and create my own is what I did.

They were DELICIOUS!! Daniel didn't really say much about them until after he had finished his third helping. He said that it was a pretty good dinner which in Daniel code means they were amazing.

I hope everyone who gives these a try enjoys them as much as we did. 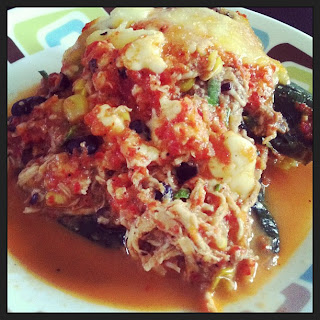 1.) Halve and seed poblano peppers. Lightly toss them with extra virgin olive oil and sea salt. Broil on high in oven until skin is browned and pulling away from pepper. Remove from oven and place them in a large ziploc bag until cooled. Once cooled peel skin off of peppers. Preheat oven to 375 degrees Fahrenheit.

4.) In a small food processor add roasted red pepper and softened shallots and garlic. Process until smooth. Add back to small pan and season with salt, pepper, cumin, and slowly mix in heavy cream. Allow to simmer over low heat.

6.) In a medium sized baking dish add a thin layer of the roasted pepper sauce on the bottom. Top with  8-10 poblano pepper halves. Top with chicken mixture and then top with 1/3 of the Queso Fresco cheese crumbled. Repeat layers. You'll have two regular layers plus an extra layer of the shredded chicken mixture. Top the last layer with remaining Queso Fresco cheese and the shredded Mexican cheese.

7.) Bake uncovered for 30-45 minutes or until browned on top and bubbly on the side. Allow to stand for a few minutes and then serve.

I know a few vegetarians and I would suggest substituting the chicken for cooked quinoa. My guess would be about two cups and it would be tasty cooked in vegetable broth and then mixed with some fresh cilantro.

Also, I apologize in advance if something is missing in the instructions or if something doesn't make sense. I typed this up with two screaming toddlers around me so my mind kept scattering elsewhere.

The ladies and I went strawberry picking today along with my mother-in-law and we came home with a big ol' bucket of strawberries that were just screaming to be made into something delicious. I adore strawberry sauce on pancakes and ice cream so I just knew I had to whip up a batch. I've never had homemade sauce before and I couldn't believe how delicious this was. Addison helped me make this and we both had giant smiles on our faces after we gave it a taste test. If you love strawberry sauce as much as I do, you must make this as soon as possible. 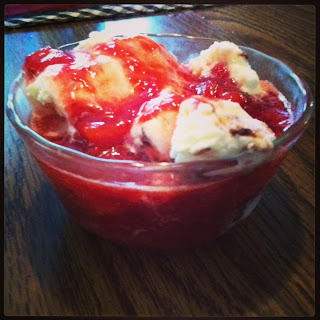 3.) Allow mixture to slightly cool and then blend about 2/3 of the mixture. Add blended mixture back to saucepan and allow to completely cool. Store in an air tight jar and keep refrigerated.
Posted by Katie at 7:29 PM No comments:

Daniel is on a wellness committee at work and for each meeting they all bring in healthy dishes to share with each other. He requested a quinoa salad of some sort so I found him a good one for his meeting which left me with an extra cup of quinoa that needed to be cooked. I came up with this dish tonight trying to use it up and come up with something different. All four of us really enjoyed this dish and surprisingly, it is very filling. I can't wait to experiment more with quinoa. 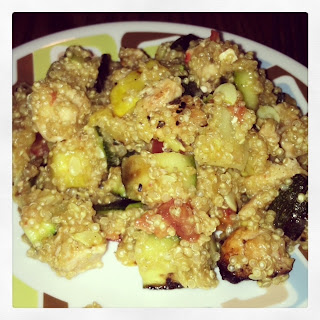 Directions:
1.) Slice zuchini and squash and coat evenly with extra virgin olive oil, salt and pepper, and garlic. Grill until tender. Cut tomatoes in half and place on the grill until the skin starts to peel off.

2.) Salt and pepper chicken breasts and grill until cooked through.

3.) Bring two cups of water with chicken broth and base seasoning and quinoa to a boil. Then cover and reduce heat to medium low and cook 10 to 15 minutes or until water is absorbed.

4.) Allow vegetables to cool and then dice them up along with the cooked chicken breasts. Gently fold quinoa into the chicken and veggie mixture and sprinkle with 1/3 of grated Parmesan cheese. Salt and pepper to taste.
Posted by Katie at 6:33 PM No comments:

I was searching for a good cookie recipe yesterday that didn't involve chocolate chips since I had none and I came across this one over at Cassie Craves. I always seems to go to her page first. Even though hers called for chocolate chips I decided to walk on the creative side and use what I did have on hand...cherry chip morsels.

I swapped out the vanilla pudding for chocolate, and the chocolate chips for cherry chips. We all thought these were pretty delicious and what you see in this picture is all that is left. I gave some to my aunt and uncle and we kept the rest to have something sweet in the house. 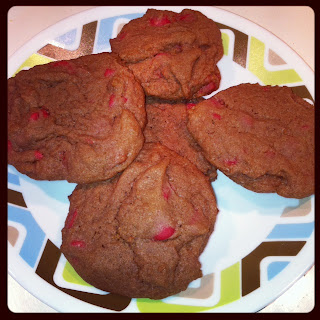 2. Using a mixer, beat together butter and sugars until creamy. Add in pudding mix, eggs, and vanilla extract. In a medium bowl, whisk together the flour, baking soda, and salt. Add the dry ingredients to the wet ingredients and mix until just combined. Stir in the cherry chips.

*Make sure you follow the step about leaving the cookies on the cookie sheet for an additional two minutes. They are very soft when they first come out and will fall apart if you try to take them off immediately.  Also, I suggest using the larger box of pudding like she did in her recipe. The smaller box is all that I had on hand and I felt the cookies could have had more of a chocolate kick to them.

Our fridge and pantry are almost bare here in our house so I was on a mission to find a sweet treat to make that included ingredients that I still had on hand.

I recently discovered Stephanie over on her blog Macaroni and Cheesecake and it's become another favorite of mine. As soon as I saw this cake I just knew I had to give it a shot.

We ate ours still slightly warm out of the oven and it literally melted in my mouth. It's like a cross between regular ol' cake and a good coffee cake and it will definitely be made again. This would be awesome served for a brunch on a holiday such as Easter and/or Christmas. 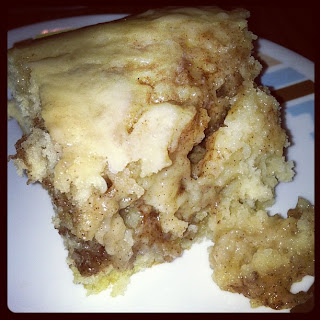 4.) Clean your stand mixer bowl and once clean, add in the 2 sticks softened butter, brown sugar, 2 tbsp. flour, and cinnamon.  Beat until fully incorporated.  Mixture will be thick.

6.) Bake for approximately 25 to 30 minutes, until a toothpick inserted comes out clean. Remove cake from oven and place in pan on a cooling rack.

Meanwhile mix together your glaze.  In medium sized bowl, whisk together the confectioner’s sugar, milk and vanilla. Pour over cake while it is still warm and carefully swirl the pan around or spread the glaze around so that it is evenly distributed over the cake.  Serve cake warm or at room temperature.  Store leftovers in airtight container.
Posted by Katie at 7:37 PM 1 comment:

Katie
Springfield, Ohio, United States
I am a 31 year old wife, and mother of two battling Crohns disease. I was diagnosed with Crohns in 2005 and it's been a downhill battle since then. During my battle with this horrid disease I married Daniel(2007) gave birth to Addison Grace(2010), and also gave birth to Cadence Leah(2011). All three are the greatest things ever to happen to me. Join me on my journey as a wife, mother, daughter, sister, friend, and wanna be self taught chef.

© Copyright 2008-2012 All graphics, images and content on this blog (unless stated) are the property and copyright of Katie's Korner.